With trauma at the root – and the result – of so many of the justice system’s processes, a new documentary, created by Toronto lawyer Roselyn Kelada-Sedra, explores how people can heal.

“There’s always trauma – always,” says Kelada-Sedra. “And our judicial system is not equipped to heal that. People sometimes go to court to try to become whole, as we put it in legal terms. And that’s not what the system’s designed for.” Read more >

August 24, 2021
The Lawyer’s Daily
Production of police or Crown files not ‘Wagg-ing the dog’ on criminal files
By Jessica Parise
You can’t use a criminal charge (and an absence of a conviction) against someone as “evidence” in a civil proceeding. Sounds reasonable, and yet, we at Sabsay Lawyers who practise at the intersection of both civil and criminal proceedings, find ourselves defending clients who have been alleged of committing a fraud in civil court, after criminal charges arising from the same allegations have been disposed of, in the client’s favour, in criminal court. Read more >

June 29, 2021
The Lawyer’s Daily
How criminal charges can also lead to civil lawsuit
By Lorne Sabsay and Roselyn Kelada-Sedra
Here’s the “Big Aha!” More and more, complainants turn to the civil court, after the criminal proceedings are over. So, your criminal law client may subsequently be served with a civil lawsuit. And liability in civil court can be established, no matter how a criminal trial ends. Read more >

October 20, 2020
The Lawyer’s Daily
A defence of self-defence schools closed during COVID-19: Part two
By Lorne Sabsay
“An essential component of any response to any threat of harm to the population, such as COVID-19, is the assurance that the equal and appropriate application of the law is maintained at the same time.” Read more >

October 19, 2020
The Lawyer’s Daily
A defence of self-defence schools closed during COVID-19: Part one
By Lorne Sabsay
“While all right-thinking people understand the need to control the virus and “flatten the curve,” we also understand the need to balance such controls with the mental health and welfare of our citizens and the economy.” Read more >

October 24, 2019
Al Soufi’s lawyer says events after Bernier protest were disturbing for ‘my client and his family’
The Hamilton Spectator
Alaa Al Soufi, 27, from Toronto, is charged with two counts of intimidation, two counts of disguise with intent and causing a disturbance. He is the only one among the four charged who was not arrested at the event. This is an “extremely stressful time” for Al Soufi, said his lawyer Lorne Sabsay.

October 23, 2019
Son of Soufi’s owners charged in protest of People’s Party event
The Globe and Mail
Lorne Sabsay, Mr. Al-Soufi’s lawyer, said that he and his client are not yet sure how they will proceed, given that Mr. Al-Soufi was only arrested Wednesday morning.
“We’ve yet to see any evidence at all,” Mr. Sabsay said. “So it is way too early to be able to say what our approach is going to be to these charges.”

October 5, 2019
The Liberals promise to expand drug treatment courts — but will this reduce harm?
Global News
“This kind of commitment amongst other drug treatment services is an incredibly positive step not just for those people who suffer from addiction who have come into contact with the criminal law as a result, but also for the ongoing opioid crisis for the people who are dying,” said Lorne Sabsay, executive director of the Canadian Association of Drug Treatment Court Professionals.

Our work in “Mohamed v. Information Systems Architects Inc., 2018 ONCA 428” was named among the 7 most important employment cases of 2018. Sabsay Lawyers represented Mitchum Mohamed (the Respondent). The summary judgment against Information System Architects (ISA) was that they did not have the right to fire him, and in fact, breached a termination clause in Mr. Mohamed’s contract.

September 14, 2018
My concussion is the best thing that’s happened to me
The Globe and Mail

May 23, 2018
A look inside drug treatment courts, by those who know
The Lawyer’s Daily

February 9, 2018
Why we need drug treatment courts
The Lawyer’s Daily

January 19, 2017
Lorne Sabsay speaking on City News about the $4M lawsuit filed today against the TTC and its officers.
CityNews 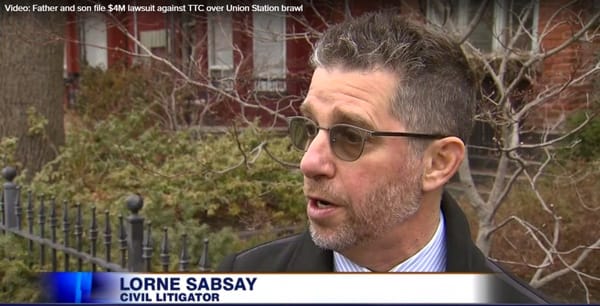 November 11, 2016
How a Paris terrorist attack led to bullets flying in Mississauga
The Globe and Mail

May 6, 2016
Condo boards on road to recovery a year after manager charged in alleged $4.1-million fraud
The Hamilton Spectator